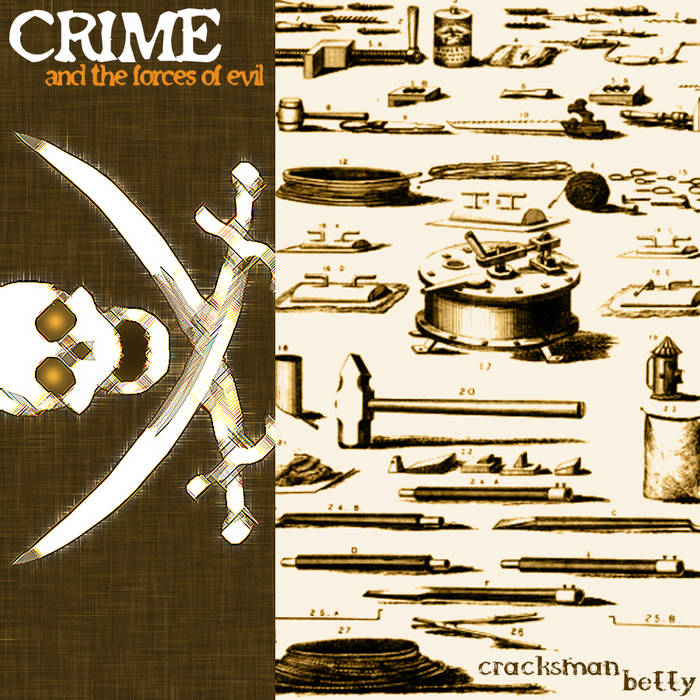 Cracksman Betty is the album we never intended to make. It was a record-something-every-month project, named for a safecracker (a “Cracksman”) and a blackjack with a woman’s name (a “Betty”), adorned with pirate skull and burglar’s tools, and we finished it up December 2011… or so we thought.

But the thing is, we went back and gave those recordings another good hard listen, and realised that I’d improved a lot both as a vocalist and an engineer over that year.

So we decided to clean it up, and do some new vocals, and oh, we can totally make Dalek Boy funnier, and Old Black Rum can be a lot more rowdy, and oh, I have this new song (“Song for a Blockade Runner/High Barbaree”) that’ll fit in just great, and…

…somewhere along the way, this became an album. It became a piece, a thing, not just an assemblage. Not a complex a piece as Dick Tracy Must Die or far-reaching as Din of Thieves will be, perhaps, but an entity, a set.

‘Or,’ I asked myself, ‘did it? Really? Am I just making that up? Let’s ask some beta listeners.’

And the first response back was:

"everything I hear in these tracks is totally Next Level from what came before."

…followed by an assortment of “impressive,” “SO MUCH BETTER” [capslock in the original], “awesome,” and “I love Dalek Boy so much.”

So I guess I wasn’t making it up!

But what is it?

I think it’s CRIME and the Forces of Evil – or various subsets thereof – not taking everything quite so seriously. I think it’s an alternate history lesson, I think it’s kicking back in the studio just to have fun, I think it’s riot girls dyking our way around Vancouver starting fights (not that I'd know anything about that, aheh), I think it's cyborgs doing it for the lulz, and I think it’s piracy, riot, and revolution. It’s kicking out some good old Cascadian folk.

Give a listen. See what you think.

CRIME and the Forces of Evil would like to thank Leannan Sidhe, Paul Johnson, and Angela Korra'ti for their guest appearances on this album. We would also very much like to thank beta listeners including Bubo G. Gear, Brian Smith, and Chris McCormick for their feedback, and all our fans for their support! Keep listening, guys! :D

All songs recorded and engineered by Solarbird the Lightbringer, a.k.a. Dara Korra'ti, of CRIME and the Forces of Evil, at Criminal Studios/Murkworks North, except for I'm a Rover (recorded live at Juanita Bay, Kirkland, Washington) and Danny Boy (recorded live at El Dorado, in Burien, Washington). CRIME and the Forces of Evil use Ardour, on Ubuntu Studio.