We're Not Friends (The Future Has a Place) 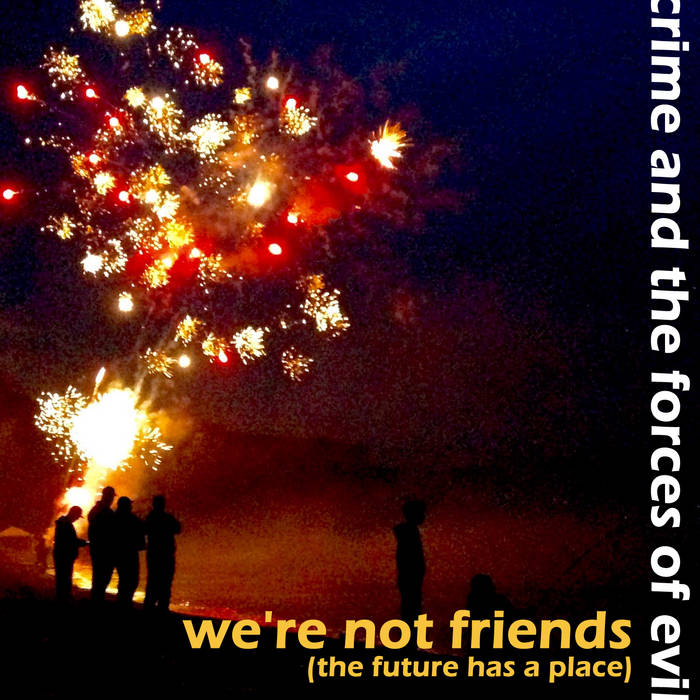 This wasn't going to be released until 2017, on Din of Thieves. But a couple of months ago, SJ Tucker posted that the mood out there touring was the worst she'd ever seen it, and called upon everybody she knew to release their most uplifting stuff, because maybe we can't do much, but we can at least do _that_, and maybe it would help. And I'd written this a few months before, for the next album, and thought, "okay, I'm in."

What this is about, though... at the top level, it's about representation, and what it means to those who are _not_ represented in media and culture. You see, there's this whole history for queers like me - if you're represented _at all_ in media, it's somewhere in the range of "psychotic" to "tragic," and there is - historically - no such thing as a happy ending for the faggots. TV Tropes has several sections on this; you can start with "Bury your Gays." The number of exceptions - in the anglosphere, you can count them on one hand, and arguably on one finger, before a couple of years ago.

And that won't sound like much to most of you, who are heterosexual, and have had this since before you can remember, and got sick of it, and started writing other and more complicated things, but you still go back to those for comfort and happiness on a fairly regular basis. You're swimming in it. The message is: this is normal, this happens, this is good. You get this.

The message _we_ get is: die in misery, faggot.

So when Korra and Asami in Avatar: The Legend of Korra _got that happy ending_ - the walking off into the sunset together holding hands ending - it sent _shock waves_ through queer fandom. (And also through straight fandom, as much of it reacted in rage. Not all, not even most, but a _lot_. Go look at the Wikipedia edit history around the end of the show, as it was me and one other person fighting _every other editor_ about it.)

Getting that felt like a giant aching wound in my brain I hadn't even known was there suddenly got better, like something deep and old stopped hurting, and I'm still getting emotional as I type about it here.

And the reactions on youtube - wow, yeah, you can go look that up yourself. It took _weeks_ to process it. That's how much of a revelation it was for us.

But this isn't a song about Korra and Asami being canon girlfriends at the end of Avatar: The Legend of Korra, and it's not about any of the other rare "red/blue" couples, as Tumblr likes to call them.

It's about _our reaction to seeing them when we never have before_. It's about stepping through getting the idea that hey, what's going on, then going nah, that can't be right, then going wait, this looks like a _thing_, but we don't get that so it _can't_ be, then the _shock_ and frankly - for a while - incomprehension when it _is_.

And then the party after. It's kind of a party song at the end. Enjoy.

when we hear of her adventures
I'm not sure what to say
all the rumours circulating
it's a hell of a day
what I think I might be hearing
I don't know how to say
is there something in the signs I see
is there something that we recognise despite that
we're not friends we're not lovers
we're not people you know
different clans different colours
and a whole different flow
but I think that when I see you
that it just might be so
could this city have a place for me?
could this city have a place for both of us, now?

Special thanks to Klopfenpop who noticed _something_ was wrong at the end of the chorale opening. It turned out to be me having gone flat for 40ms (!) and nobody heard it but him. And we fixed it and it helped.